WHAT WE CAN EXPECT WITH BIDEN

I think that we are already making some progress in what could be the new relations with the United States.

The United States Senate confirmed Alejandro Mayorkas as Secretary of National Security.  A man with an outstanding record in the negotiations with Cuba during the Obama administration.

At the same time, Emily Mendrala, a prominent connoisseur of relations with Cuba, has been appointed Coordinator of Emigration and Cuban Affairs of the Department of State.  And at the same time, Senator Ron Wyden, Chairman of the Senate Finance Committee, presented a bill on trade between Cuba and the United States.  Which, he said, seeks to repeal the sanctions and establish normal commercial relations with Cuba.  All this in the context of President Biden having declared that relations with Cuba will be reviewed.  Though how far and at what speed we do not know.  And in the context of a Congress with a Democratic majority in the House and 50 and 50 in the Senate and a Vice President as tie breaker.  I think it’s been a long time since we've been in a situation like this.

Without a doubt, things with Cuba are beginning to move.  In the midst of an environment where Trump's decision to put Cuba back on the List of Countries Sponsor Terrorism has had very negative repercussions.  Undoubtedly, the objective of the ousted President was none other than to further complicate the task for the newly elected President.

Trump's disastrous policy in the face of the pandemic, disrupting relations with allies, leaving the economy in the midst of the most acute crisis, exacerbating the racial question, criminalizing immigration relations and then promoting the assault on the Capitol seems not to have been enough for Trump.  In the case of Cuba, he also put Title III of the Helms-Burton law into practice, laid on more than 200 aggressive measures, and topped it off with putting Cuba back on the List of Countries Sponsoring Terrorism.  From which Obama had removed us -- quite rightly -- in 2015.

There is much that Biden must dismantle to get things working with any normality.  Which is why I believe that we should not rush, because in the midst of this bulky agenda, we should not hope that the case of Cuba will have a very high priority in the policy of the new Administration.

Nevertheless, it is astonishing that appointments have already been made that do lead to some hope.

At the very least, the aforementioned people appointed at least know the Cuban issue thoroughly and carry plenty of experience.  Which is above all the case of Mr. Mayorkas, who negotiated the 22 agreements in the opening of Obama to Cuba.

In reality, it all depends on how far President Biden intends to go with Cuba.  How near or how far he wants to go from what Obama did.

If he wishes to do the same as Obama, there is already an advanced terrain upon which to move with that same specialist who already was a part of it all.  That said, given the damage that Trump did to Obama's policies towards Cuba, there are some obvious priorities:

Remove us from the List of countries that promote terrorism, from which Obama had already removed us in 2015.
Repeal the decision to apply Title III of the Helms-Burton Law which no administration had previously dared since passage of the Bill in 1996 given the damage that this could do to the relations of the United States above all with its allies.
Because if, as Biden's spokesperson declared, Cuban-Americans are the best ambassadors to Cuba, then restoring flights, travel visas, people-to-people exchanges and tourism is the first apple to fall from the tree.
From there returning to normal at the U.S. Embassy in Havana follows logically, jettisoning the stupidity of a non working consulate.
Revitalize visits, academic exchanges, student visits, exchanges of functionaries, flights to the provinces, etc.
Restore remittances.  And the facilities for sending money to Cuba.
Lift sanctions on hotels.  And the ability to use credit cards.

That is where it could start and if they are such good ambassadors, it could well open the possibility that residents of the United States, North Americans and Cuban-Americans, could invest in Cuba.

We know that there are things that are a little more complicated.  The famous problem of the so-called zunzuneo, the sonic buzzing: with which it is more than proven that Cuba had nothing to do.

Then there are these:

Return to the Migration Agreements that were already signed.
Revitalize collaboration in the interdiction of drug trafficking.  How beneficial that has been to the United States.  And how effective Cuba has been shown to be.

Of course, it would be very usefu for the U.S. Embassy to abandon the "bad vices" for which Trump had been using it.

At the same time, it cannot be forgotten that the foreign policy panorama which which Biden has to deal is quite complex.  And Biden is no angel, but an imperial president with the job of defending the interests of the world's leading power, a hegemony more threatened than ever before.

So there are many challenges that he faces, and no great reason to think that he will behave well with us while trying to meet them.  Trump lost a lot of ground, the world is in turmoil with the andemic, and the supremacy of the United States is more than in danger.  They are caught up in  confrontation, especially with China.  With Russia too and there are plenty of other worries.  In this hemisphere, the Left is gaining strength again and their allies, let's say, Brazil, Chile, Colombia, Ecuador, Peru, are seeing people going into the streets; Bolivia has gotten out of hand; Venezuela has proven beyond their control; hopefully we won’t get bound up in that.  Haiti burns.  In reality, Cuba would be the lesser evil.  Only Panama and Costa Rica seem to be calm.  This has got to be a stimulus to them for coming to some trms with us:  We are the closest problem and perhaps the lesser evil.

Then there is the Middle East, Iraq, Iran, Afghanistan, Libya, Syria, Palestine, Israel.  They all have problems and require policies.  To confront such problems, it first is necessary to rebuild relations with the Allies and within NATO, which Trump ended.  And many of those who previously supported them no longer support them.

We are then at the beginning of a path, or at the beginning of one already traveled.  Hopefully, President Biden's promises to resume Obama's policies are true.  I believe that for both countries it is a second chance, a chance that the Donald Trump administration frustrated, with treachery and underhandedness.  Biden is not Trump, although he is not Obama either.  He is the 12th President we have had to deal with.  I'm sure he won't be a Trump, but will he be an Obama or the closest thing?

There has not been time yet to determine it.  Let's wait a little bit. 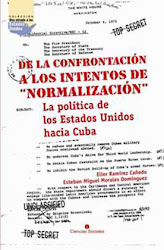